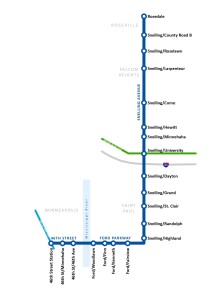 In late 2015, Metro Transit will introduce the A Line. It’s a new kind of bus service for the Twin Cities’ busiest urban streets. Bus rapid transit – or BRT – is a package of transit enhancements that adds up to a faster trip and an improved experience.

The A Line on Snelling, Ford & 46th Street will be the first in a system of urban arterial BRT (Bus Rapid Transit) lines to be built in coming years.

Metro Transit construction on the eastbound and westbound sides of Ford Parkway at Woodlawn began on July 22 and will continue for approximately four weeks. Construction involves demolition and removal of some sidewalk concrete, underground electrical work and station platform installation. During construction these detours will be in place:

Road/Lane Closures
Ford Parkway will be down to one lane of traffic between Woodlawn Avenue and Mt. Curve Boulevard on both sides of the street. Concrete will be poured at the eastbound side of Ford Parkway at Woodlawn. This may slow traffic but a full closure of eastbound Ford Parkway.

Expect a full closure of the westbound side of Ford Parkway between Woodlawn and Mt. Curve Boulevard by July 31. Westbound road traffic will be detoured to Highland Parkway for approximately one week after which it will return to one lane.

Sidewalk Detour
All pedestrian traffic between Woodlawn Avenue and Mt. Curve Boulevard is detoured to the south (eastbound) side of Ford Parkway. A temporary pedestrian walkway has been set up in the driveway of the old Ford Plant site.

Aside from these closures, remaining bus stops will not be affected by weeklong westbound side closure of Ford Pkwy between Woodlawn Avenue and Mt. Curve Boulevard.

A Rider Alert will be posted when impacts to bus stops are determined.

Construction will continue on 46th Street and 46th Avenue through the second week of August. All lane closures, sidewalk and bus detours will continue until this work is complete.

Due to ongoing construction, northbound and southbound Route 84 buses have been detoured from Snelling Avenue to Pascal Avenue between Marshall Avenue and Pierce Butler Route. Temporary bus stops have been marked. For details regarding bus detours and to plan your trip contact the Transit Information Center at 612-373-3333.

Additional information regarding this project is available at A-Line. The site is updated regularly with the latest project information and frequently asked questions.

• Frequent service: Service so frequent you won’t need a schedule, along with fewer stops so you’ll be moving more of the time

• Train-like features: You’ll pay your fare before you get on for faster boarding and wait at enhanced stations

• Specialized vehicles: Unique, recognizable buses with wider aisles and additional doors so more people can get on and off easily

LEARN AND GIVE YOUR FEEDBACK

Come and Learn about the Snelling Bus Rapid Transit (BRT) project and offer your
comments at an open house: