Saint Paul will be adding roll carts and collection at the same spot as your garbage is picked up. For many of us that means the alley.

Carts and alley collection will go into effect by the start of Saint Paul’s next recycling contract January 1, 2017. Watch for additional announcements as we get closer.

It has been an eventful spring and summer in Saint Paul when it comes to reducing, recycling and composting! Since the launch of the new All In recycling program this past April, Saint Paul residents have enthusiastically embraced the new features of the program. With the introduction of single-sort recycling and the collection of additional plastics, there has already been a 16% increase in the volume of materials collected.

Participation in the Citywide Community Cleanup events also continues to be strong; 91 tons of materials were kept out of the waste stream from just three events this spring. Residents are delivering materials and volunteering at the events from all areas of the community.

Participation in the organics drop off program has also exceeded expectations. Three of the four Ramsey County drop off sites have had to double the size of collection containers and increase frequency of collections due to the high volume of participants and material.

2015 and Beyond
The City is continuing to make modifications and improvements to the recycling program. In 2015 and beyond, efforts will continue to upgrade the apartment recycling system, increase backyard composting education and expand “away from home” recycling opportunities. Stay tuned as these programs are developed.

While it was the City’s goal to roll out wheeled, lidded carts to all Saint Paul households in the spring of 2015, the plan has been temporarily delayed due to an unexpected and significant increase in costs.

City staff is developing a Request for Proposal (RFP) for recycling services, as the City’s current recycling contract ends Dec. 31, 2016. A new program will be in place in January of 2017.  Despite this delay, the City remains committed to providing the best, most convenient service possible – including organics collection and the collection of wheeled, lidded carts from alleyways. Both of these features are expected to be part of the program beginning January 2017.

More Information
Visit stpaul.gov/recycle to learn more about how you can participate in the All In program and check out the new All In “Recycling 101” video for a reminder of some of the recyclables that should go in your recycling bin. Please continue going “all in” with your recycling efforts and do your part to reduce, recycle and compost in Saint Paul! 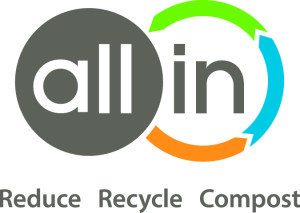