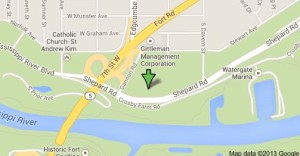 The St. Paul City Council voted unanimously on June 3 to reject an appeal by the Friends of the Mississippi River to block Johnson Brothers’ plans to construct a mixed-use luxury apartment and commercial building on Shepard Road and Davern Street. However, the future of the project remains uncertain since the council also agreed, at the request of Ward 3 council member Chris Tolbert, to have the new building’s height scaled back from 73.5 to 60 feet. For the story, see the June 10 issue of the Villager.

Position of the Department of the Interior
Meeting Results

Representatives of the Shepard & Davern Development and the Highway 5 Interchange Study presented preliminary plans to the Community Development Committee.  Below are documents shared at that meeting.

The Johnson Brothers Construction Company has advised that the Shepard Development Project will begin the grinding of concrete chunks this week. This will be a very noisy and dusty process that could last 30-60 days. The ground up concrete will be used for landfill. Grinding hours are Monday-Friday, 7am-5:30pm.

When the grinding is complete, the lot will be filled-in and leveled with dirt, then seeded with grass for the sake of appearance. One plan being considered for the lot is “luxury apartments”; however, the City of Saint Paul and Johnson Brothers must come to an agreement on the project before work can begin, and this could take months.

Johnson Brothers expresses their gratitude for the patience and endurance of the neighbors surrounding this project.